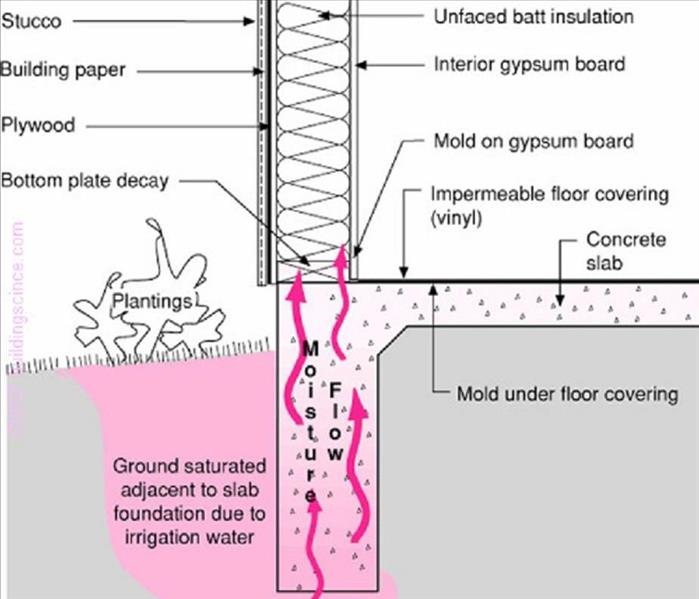 Water comes in four forms: solid, liquid, vapor and adsorbed. All four forms can cause grief to building owners, designers and contractors. When water causes building problems investigating and diagnosing the problem can be challenging because water constantly changes its form inside a building and within its materials. The investigator must hunt down the water thinking like water.

Water is supposed to be easy to understand. It only comes in four forms or states. And the rules governing water movement are straightforward:

Water always changes its behavior, because its form is never constant. Evaporation, condensation, capillary suction, gravitational flow, vapor diffusion and mass flow of moist air are all happening at the same time inside building cavities and inside materials.

Water plays clever tricks on us by changing forms and methods of movement along its flow path. It’s devious and treacherous and laughs at us simple-minded humans whenever it can get away with it. We have to fight it by knowing its tricks. We’ll begin with some simple stuff – diagnosing and finding rain leaks. Then we’ll get into some clever tricks water can play on us.

Rain falls out of the sky, mostly straight down. Sometimes the wind smacks it against the walls. Diagnosing rainwater leaks is not that complicated. If things get wet after a rain, it’s probably the rain. Start at the wet spot and work backwards and upwards. This gravity thing is pretty predictable. Now, there is a catch – water likes to stick to things and it can run horizontally quite a long ways because nothing is ever completely flat. And that pesky wind can blow it uphill a ways – sometimes over things that are an inch or two high – like sills, flashings and ledges.

The best time to diagnose rainwater leaks is when it is raining. Duh. And unless you are superman and can see into walls, you should be prepared to make lots of holes to see inside of assemblies. Now, it doesn’t always rain when you are asked to look. So you can make your own rain when you need to. A garden hose works real well. Consultants get embarrassed when they charge lots of money while using a garden hose so they use a spray rack instead to make it seem more “technical” and “scientific.” But a leak is a leak whether the water comes from a hose or a calibrated spray rack spraying calibrated water at a calibrated air pressure. In fairness to consultants, standardized tests can come in real handy once you know the flow path and you want to know if the leaking windowyou found meets industry standards. Just remember to be “gentle” when you use a hose – you don’t want the momentum of the water spray forcing water into the building. The secret is misting the surface and letting gravity do the dirty deed. So fire hoses are out.

Sometimes a building only leaks rainwater when it is windy. And there isn’t always wind around when you need it – like when you are on-site looking for the leak. So make your own wind. Instead of blowing against the building from the outside, suck air out of the building from the inside to simulate wind driven rain. Turn off the supply air, and crank up the exhaust. You should probably only do this with adult supervision, but you get the picture.

Most of the time rainwater leaks are straightforward to diagnose, but sometimes finding moisture due to rainfall is not such an obvious process.

Up to now, the story has been pretty simple. Let’s complicate it by splashing rainwater on a brick veneer. Brick is a sponge. Brick wicks water into itself because it is porous. The mortar in the joints between bricks is also a sponge. Mortar wicks water into itself because it is porous. There are also cracks between the brick and the mortar. These cracks are also “pores” and they also wick water. Remember, porous materials suck. Think of a brick veneer as a moisture reservoir that is filled during a rainstorm. So now we have this wet sponge on the outside of your building. The sun comes out. The sun beats down on the wet brick on the southwest side and makes the water in the brick hot. How hot? Probably 120 degrees F? Let’s go to the psychometric chart. Find where 120 degrees F crosses the saturation curve (100 percent RH). Hey, we’re off the chart. We have to go to the steam tables. Wow. Any guesses what direction the water in the brick wants to go? Did I mention the building this brick veneer is enclosing is air-conditioned?

So inwards goes the water vapor, traveling along the temperature gradient and along the concentration gradient. How far it travels depends on what’s in its way. If it runs into something impermeable like foam sheathing or a rubber membrane on the backside of the cavity behind the brick veneer, the vapor won’t travel far. If it hits foam sheathing or a rubber membrane the vapor condenses, turns back into a liquid and runs down the back side of the airspace, hopefully to a flashing where it is directed out of the wall to the outside.

But what happens if it runs into a building paper or a housewrap that breathes? The heat driven vapor blows through it like a hot knife through butter. What is the building paper or housewrap installed over? Probably a gypsum sheathing – highly permeable to vapor. So vapor diffuses right through it. Next comes fiberglass cavity insulation, which can’t stop the vapor – it’s permeable too. The vapor goes all the way in until it hits the plastic vapor barrier. Not a good idea to put a plastic vapor barrier on the inside of a brick veneer wall that sees rain and sun. The vapor condenses on the plastic vapor barrier and runs down the wall to sit in the bottom plate track. Now we have a full range of problems to choose from: corrosion, mold, odors or staining. You can get the same effect by installing a vinyl wall covering rather than the plastic vapor barrier. Just ask the hotel industry about this practice.