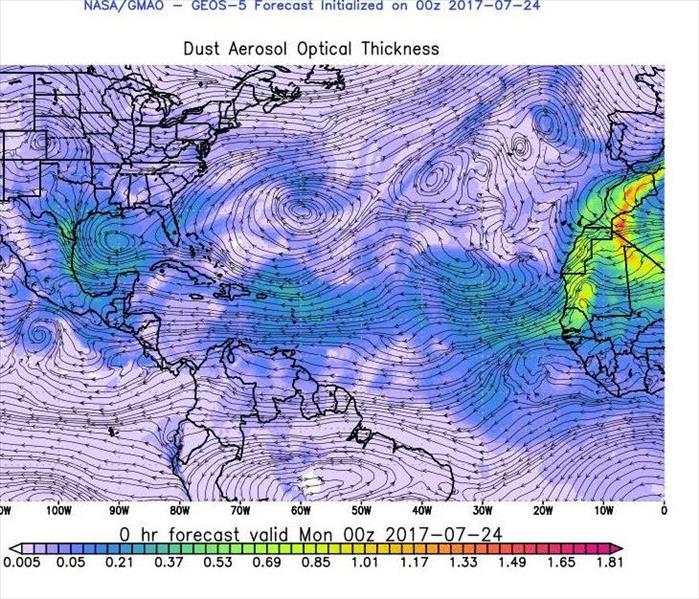 The Saharan Air Layer (SAL) is an extremely hot, dry and sometimes dust-laden layer of the atmosphere that often overlies the cooler, more-humid surface air of the Atlantic Ocean. In the Sahara Desert region of North Africa, where it originates, it is the prevalent atmosphere, extending from the surface upwards several kilometers. As it drives, or is driven, out over the ocean, it is lifted above the denser marine air. This arrangement is an inversion where the temperature increases with height. The boundary between the SAL and the marine layer suppresses or "caps" any convection originating in the marine layer. Since it is dry air, the lapse rate within the SAL itself is steep, that is, the temperature falls rapidly with height.

Disturbances such as large thunderstorm complexes over North Africa periodically result in vast dust and sand storms, some of which extend as high as 6,000 meters. These can be driven out to sea within the SAL as far west as North America.

In the case of Africa, winds blow twenty percent of dust from a Saharan storm out over the Atlantic Ocean, and twenty percent of that, or four percent of a single storm's dust, reaches all the way to the western Atlantic. The remainder settles out into the ocean or washes out of the air with rainfall. Scientists think that the July 2000 measurements made in Puerto Rico, nearly 8 million tonnes, equaled about one-fifth of the total year's dust deposits.

The SAL passes over the Canary Islands where the phenomenon is named "Calima" and manifests as a fog that reduces visibility and deposits a layer of dust over everything.

These clouds of dust are visible in satellite photos as a milky white to gray shade, similar to haze.

Findings to date indicate that the iron-rich dust particles that often occur within the SAL reflect solar radiation, thus cooling the atmosphere. The particles also reduce the amount of sunlight reaching the ocean, thus reducing the amount of heating of the ocean. They also tend to increase condensation as they drift into the marine layer below, but not precipitation as the drops formed are too small to fall and tend not to readily coelesce. These tiny drops are subsequently more easily evaporated as they move into drier air laterally or dry air mixes down from the SAL aloft. Research on aerosols also shows that the presence of small particles in air tends to suppress winds. The SAL has also been observed to suppress the development and intensifying of tropical cyclones, which may be related directly to these factors.