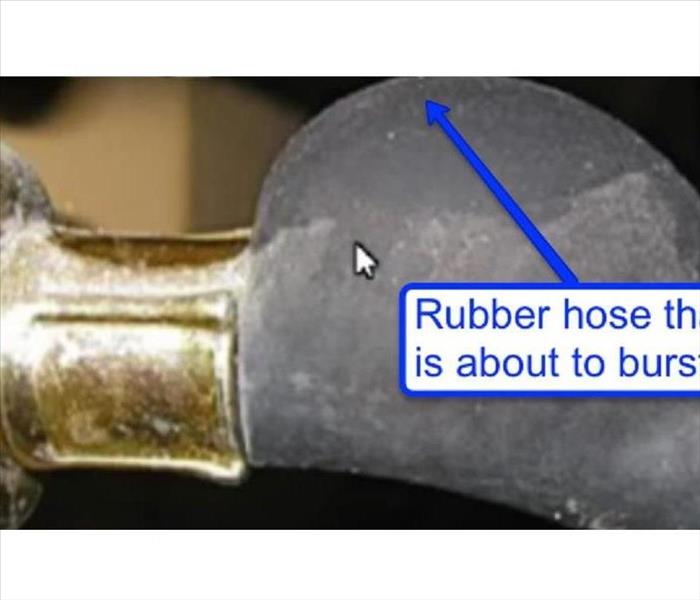 Washing Machine Hoses: A Disaster Waiting to Happen, Water Damage in Cherry Hill NJ, Though most property owners are careful to protect their buildings and possessions against fire, burglary, storms, and other dangerous conditions, they often overlook a situation that insurers know to be one of the most potentially destructive and costly: water damage caused by leaking or malfunctioning home appliances, especially washing machines. Unlikely as it may seem, water damage from washing machines is one of the top five causes of claims to home insurers, according to the Institute for Business and Home Safety, which analyzed 525 washing machine claims from multiple insurance companies.

Of all water damage claims related to washing machines, more than half – nearly 55% – are from water supply hoses that leaked or burst. And these claims are costly, with the average claim running to more than $6,000.

Why and How Do Washing Machine Hoses Fail? Over time, most washing machine hoses, even those that are installed properly, will eventually fail, leading to leaks or catastrophic floods caused when the hoses burst. Failure may be caused any of several factors, including age, installation error, poor-quality materials, and poor design. Under normal conditions, water in the hoses is under the same pressure as in other faucets in the building. When the hose becomes weakened, or when the connection is faulty, the water pressure will break the hose or coupling, sending water flooding out. In a typical residential plumbing system, water will spill out of a single burst hose at a rate of about 650 gallons per hour (that’s six gallons per minute, or 2½ tons per hour).

Because the supply lines to the washing machines are always “on,” water will flood from a broken hose until someone notices it and turns off the main supply line. If the hose breaks at night or when a building is unoccupied, thousands of gallons of water might flood the building before the problem is discovered. If the line breaks on a washing machine situated on an upper floor, the damage will be extensive as the water pours through the floors. Most traditional washing machine hoses are made of reinforced rubber or polymer.

These materials lose resiliency as they age, making them subject to cracks, leaks, and bursting. The IBHS study showed that failure rates increase dramatically in hoses that are more than five years old; the average age of failed hoses was 8.7 years. More than half of all failures occurred by the time the machine and its hoses were eight years old, and nearly 80% occurred before ten years. Improper installation can also damage the hose, leading to premature failure. The most common installation error is failure to leave sufficient room between the machine and the wall connection to prevent kinking or bending of the hose, particularly near the valve connections, as described below. Cracks, crimps, or blockages in the line will cause damage and lead to leaks or total failure.

Poor design (including fabrication from poor-quality materials) is probably the most significant factor in the failure of both kinds of hose commonly in use – the standard black rubber hose and the braided steel variety – though these products usually fail for different reasons, as described below. Standard black washer hoses are made of rubber tubing with a polyester reinforcement lining. The metal inserts at the coupling end are rolled and stamped from thin sheets of copper alloy. Most failures occur at the end of the hose, where the metal insert comes into contact with the tubing.

Failures generally occur for one of the following reasons: Razoring — The metal insert has a very sharp edge which is in direct contact with the rubber tube. This edge becomes progressively thinner and sharper as it is worn away by the movements of the water and by the effects of electrolysis. In a process called “razoring,” the motion of the washing machine causes the metal edge to rub repeatedly against the inside of the hose, cutting it gradually from the inside out. Stress Fractures — The metal insert is attached to the hose by a ferrule, or ring, which is crimped tightly to hold the pieces together. The crimping can cause a stress fracture in the hose, which is then subject to failure, especially as the rubber ages and begins to deteriorate.

Rusting — Corrosion (rusting) of the metal fitting can cause failure in two ways. First, as the thin metal fitting corrodes, it becomes jagged and rough and cuts into the hose as the washing machine operates. Water can leak between the hose and its outer covering, forming a bubble, a critical warning sign of imminent failure. Though a bubble may appear anywhere along the line, most breaks occur at the point where the metal fitting meets the rubber tube. Second, as the fitting continues to corrode, it can become so weak that it may eventually break apart. Braided stainless steel hoses (sometimes called “steel-clad” hoses) were designed as a reliable replacement for standard black hoses, but they, too, have been problematic. They have proven to be not much stronger than standard rubber hoses, and they are also subject to failures related to the to failures related to the materials from which they are fabricated.

Crimping — A braided stainless steel hose consists of a plastic or rubber tube covered with a braided steel sheath, which is sometimes protected with a thin nylon coating. Because of the variety of materials used, a very tight crimp is required to fasten the metal fitting securely to the hose. During the manufacturing process, this tight crimping can damage the hose by cutting into the rubber. Once the product is installed on a washing machine, the action of the water and the movements of the machine can make the cuts worse, leading to eventual failure. Corrosion — The stainless steel braided cover can oxidize when exposed to chloramine, a chemical increasingly popular in water treatment. Under these conditions, the stainless steel braided cover can weaken, fray, and even break, so that it can no longer provide strength to the hose.

Inspect Washing Machine Hoses Regularly In many cases, the hoses and fittings that connect the washing machine to the water source are visible and easy to inspect every time the machine is used. If your machine’s hoses are not visible, find out how to gain access to them in order to inspect them once a month or so. Inspect both hot and cold water lines. Most failures occur near the connection, where the hose typically bends. Here’s what to look for: Signs of Imminent Failure. Look for obvious signs of deterioration or imminent failure, such as blisters, bulges, bubbles, cracks, unraveling, discoloration, crimps, or kinks, especially near the connections and turns in the hose. Leaks. Check for moisture, drips, rust, discoloration, or leaks in, on, or around the hoses and connections or in the catch pan (if present). Check the connections to be sure that they are tightened properly, as described below. Even a small leak may indicate an imminent failure. Proper Positioning. Be sure that the washing machine is located at least four inches from the connections (usually at the wall) so that the hose is not bent or kinked. Check to see that the machine is properly balanced so that it does not “walk” during use. The motion of a “walking” machine will place added stress on the hoses and connections.